On our second day in Israel we took a hike straight up the face of a mountain. I was thankful for the March temperatures and the Camelbak (TM) full of water, as we made the grueling ascent up Masada! A scaled model of the fortress.

“Masada was Herod‘s royal citadel and later the last outpost of Zealots during the Jewish Revolt. The citadel was a site of the most dramatic and symbolic act in Jewish history, where rebels chose mass suicide rather than submit to Roman capture.” This is a cistern used by King Herod at his palace at Masada. “One of Herod’s first undertakings was an intricate water supply system, that was of crucial importance in the arid climate of Masada. It consisted of a drainage system to carry rainwater from the two wadis west of Masada to a group of cisterns in the northwestern slope of the rock. 12 huge cisterns could hold together about 40 thousand cu.m. of water.” (Quotes on Masada from: http://mosaic.lk.net/g-masada.html)

I couldn’t help but think of this passage from Jeremiah as we walked past one of the large cisterns:

Jeremiah 2:13, NIV
“My people have committed two sins:
They have forsaken me,
the spring of living water,
and have dug their own cisterns,
broken cisterns that cannot hold water.

Jeremiah laments with the Lord that the Israelites have made faulty cisterns. They have spun their wheels and worked to an end that simply will not satisfy. Check out the same passage in the Message Translation:

“Stand in shock, heavens, at what you see! Throw up your hands in disbelief—this can’t be!”  God’s Decree.”My people have committed a compound sin: they’ve walked out on me, the fountain of fresh flowing waters, and then dug cisterns— cisterns that leak, cisterns that are no better than sieves.” The Message

Do you know what a sieve is? It’s like a mesh strainer. Sounds perfect for catching water, right?

And yet how often do I turn to shopping, friendships, my spouse, food, exercise, money, entertainment, social media, and even “relaxing” hoping these things will fill what God alone can satisfy?

“Men are in a restless pursuit after satisfaction in earthly things. They will exhaust themselves in the deceitful delights of sin, and, finding them all to be vanity and emptiness, they will become very perplexed and disappointed. But they will continue their fruitless search. Though wearied, they still stagger forward under the influence of spiritual madness, and though there is no result to be reached except that of everlasting disappointment, yet they press forward. They have no forethought for their eternal state; the present hour absorbs them. They turn to another and another of earth’s broken cisterns, hoping to find water where not a drop was ever discovered yet.”-Charles Spurgeon

Oh that we would turn to the fountain of Living Water rather than trying to catch rain water with a strainer. 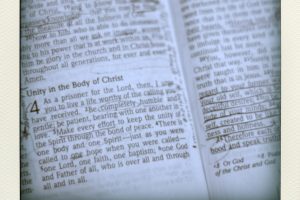 Yesterday we talked about how our center of gravity should[...] 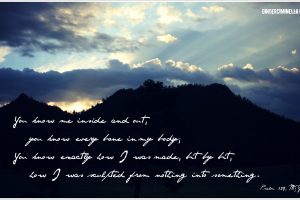