They came to an area called Gethsemane. Jesus told his disciples, “Sit here while I pray.” He took Peter, James, and John with him. He plunged into a sinkhole of dreadful agony. He told them, “I feel bad enough right now to die. Stay here and keep vigil with me.”

Going a little ahead, he fell to the ground and prayed for a way out: “Papa, Father, you can—can’t you?—get me out of this. Take this cup away from me. But please, not what I want—what do you want?”

He came back and found them sound asleep. He said to Peter, “Simon, you went to sleep on me? Can’t you stick it out with me a single hour? Stay alert, be in prayer, so you don’t enter the danger zone without even knowing it. Don’t be naive. Part of you is eager, ready for anything in God; but another part is as lazy as an old dog sleeping by the fire.”

He then went back and prayed the same prayer. Returning, he again found them sound asleep. They simply couldn’t keep their eyes open, and they didn’t have a plausible excuse.

He came back a third time and said, “Are you going to sleep all night? No—you’ve slept long enough. Time’s up. The Son of Man is about to be betrayed into the hands of sinners. Get up. Let’s get going. My betrayer has arrived.”

No sooner were the words out of his mouth when Judas, the one out of the Twelve, showed up, and with him a gang of ruffians, sent by the high priests, religion scholars, and leaders, brandishing swords and clubs. The betrayer had worked out a signal with them: “The one I kiss, that’s the one—seize him. Make sure he doesn’t get away.” He went straight to Jesus and said, “Rabbi!” and kissed him. The others then grabbed him and roughed him up. One of the men standing there unsheathed his sword, swung, and came down on the Chief Priest’s servant, lopping off the man’s ear.

Jesus said to them, “What is this, coming after me with swords and clubs as if I were a dangerous criminal? Day after day I’ve been sitting in the Temple teaching, and you never so much as lifted a hand against me. What you in fact have done is confirm the prophetic writings.” All the disciples cut and ran.

We deserve the cup of wrath.

Thank you for the Cross, Lord.

All I Want for Christmas (& Forever)

Time is a precious commodity. I cannot believe how[...] 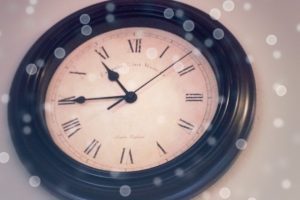