I typically decide upon a theme for the week each Monday. I spend time reading, journaling, thinking, praying and then determine the posts that will follow. By 10:00am Monday morning I knew I wanted to explore hospitality this week.

Hours later my dear friend Renea beat me to the punch! She is a contributing writer to a great blog (Thinking Through Christianity) and also happens to be one of the wisest people I know. I wanted to share her thoughts on hospitality with you this Friday.

We might get a broader picture when we invoke the phrase Southern hospitality.* This consists of everything from someone offering you a ride in their chicken truck to nearest PepBoys when your car breaks down (true story), to bumming a cigaret off a stranger; from holding the elevator without being asked, to insisting on water breaks for the movers you’re paying by the half-second.

These are all good examples of hospitality. The first examples happen mostly among friends and family, the latter between strangers. Both are vital to the possibility of our progressing as… human beings.

But these expressions of hospitality are not usually part of our everyday comings and goings. They’re generally either extremely planned or extremely unplanned. And, sometimes what we primarily think of as hospitable acts lend themselves toward being extraverted acts.

Proposal: Hospitality is neither for certain sects of people—extraverts and women**—nor is hospitality a once in a while, or “merely polite,” venture. Hospitality, in it’s most essential form of expression, is ontological…

I can’t encourage you enough to follow the link and finish her article. (Don’t worry, I had to look up ontological for a refresher too. Ontology: The branch of metaphysics dealing with the nature of being.) She makes some great points that still have me thinking.

May our homes and hearts be open!

Have you ever taken CPR or First Aid training before?[...] 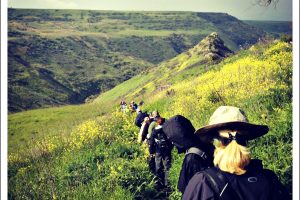 “But in faith Abraham left everything – his home and[...]