How time flies! Can you believe that next weekend will already be Easter?

Easter has always been a wonderful time to be a member of my extended family. The cousins, aunts, uncles, grandparents, and many dogs head down to Galveston, TX to spend the weekend together. 21 people in any house can be a good time… as long as it’s not raining. We’ve always had good times in Galveston. The excitement of Easter derived not only from the Celebration of the Resurrection, but also from the Easter Egg Hunt and the Cha-Cha Church. The Church isn’t actually called the Cha-Cha Church, that’s just what a majority of my family calls the church. We attended the gathering one Easter morning and were quite the fish out of water. Perhaps it was the electric organ in place of our usual pipe organ, or the excited sopranos in the front row… whatever the case, my brother asked the next year if we would be attending the Cha-Cha Church again.

We attended the little church many times over the past decades. Our large family would absorb half of the seating. There was always a rush to be the grandchild lucky enough to sit with Grandma. Not only would Grandma tickle your arm with her fingernails until your skin almost fell off, but she is a guarantee for a great laugh during the service. For if any soprano in the front row should make an excited expression we were all in for it. Three rows of shaking family members who had been trained to listen with respect and silence were now losing it as they watched their matriarch with tears of laughter rolling down her face.

I remember one particular Easter when we decided to attend the early service. Usually our enormous clan could file into the sanctuary in shifts not really making a blip on the radar. The early service was almost empty when we arrived. We filed in taking our usual seats on the right and gasped as we noticed a new organist and the absence of the Island Choir. We all waited to see what this would mean for the service. As usual, the Pastor offered for any children to make their way to a special class and no one from our section obeyed. We do not leave our formation, no matter how much aunts and uncles prod. Don’t make me leave the pack! So we remained and the sermon proceeded and everything went as usual. That was until the end came too soon for the Pastor. He looked up from his hymnal and looked at our crew and said, “Well, I suppose we have time for some special music. Does anyone here sing?” In unison, 19 heads turned and looked my way. Oh joy. I was pulled up on stage to sing a duet with the Pastor. He offered to let me choose the song. I picked the first Easter song I could find, “Victory in Jesus.” We prepared to sing when suddenly the little organist cried out, “I don’t think I know that one.” Well, we didn’t let that stop us, now did we? My dad was sent up to accompany us and that morning I sang “Victory in Jesus” with the Pastor of the Cha-Cha Church.

The next year a similar situation came about, but I was not about to be sacrificed by my family. I stepped onto the stage with at least five cousins in tow.

“Christ the Lord is Risen Today…..”

It’s been one of those weeks where everything is happening[...]

As Jesus and his disciples were on their way, he[...] 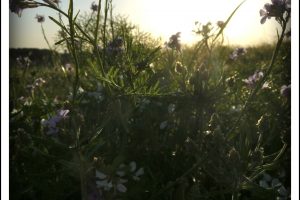 After the Sabbath, as the first light of the new[...]