I didn’t post anything yesterday. Since starting this series I’ve made an attempt to post every Tuesday and Wednesday. My parents were in town visiting until late yesterday afternoon. I made being present a priority. I hardly opened my computer. Apologies if you are awaiting an e-mail response from me! It’s coming soon.

In the past I might have let my inbox or the need to post translate into stress. But not this year. I’m finally learning to just let go. There is zero chance of me living up to a Martha Stewart Christmas. My side dishes for Thanksgiving won’t make it onto your Pinterest board. I will not be meeting the expectations of our culture’s holiday season, and the sooner I remember that fact the more pleasant my days will be! Part of tuning my heart to sing grace actually involves the permission to say “no” in order to say “yes” to receiving grace.

I’m talking to you, Miss/Mr./Mrs./Ms. Perfection. This season that celebrates the Prince of Peace also threatens to steal our peace. But let’s make a promise right here and now: fight guilt with grace. “Grace isn’t natural, but supernatural. The natural responses when you get hurt are either to strike back or to withdraw. When we instead step out of the way and allow God to work through us, responding with unfailing love, even perennials that have endured a deep freeze may lift up their wilting heads and live.” (Dee Brestin, The Friendships of Women)

This is the God of the gospel of grace. A God who, out of love for us, sent the only Son He ever had wrapped in our skin. He learned how to walk, stumbled and fell, cried for His milk, sweated blood in the night, was lashed with a whip and showered with spit, was fixed to a cross, and died whispering forgiveness on us all.

…To live by grace means to acknowledge my whole life story, the light side and the dark. In admitting my shadow side I learn who I am and what God’s grace means. As Thomas Merton put it, “A saint is not someone who is good but who experiences the goodness of God.” Gift yourself the chance to be less than perfect this season. Rely on the Lord and depend upon His strength. When you start resting on the promise that you are loved and that His grace is enough, you can’t help but sing of that grace.

“Come, thou Fount of every blessing,
tune my heart to sing thy grace;
streams of mercy, never ceasing,
call for songs of loudest praise.
Teach me some melodious sonnet,
sung by flaming tongues above.
Praise the mount! I’m fixed upon it,
mount of thy redeeming love.”

To catch up on the rest of the series:

Step #5. Listen for the Echoes 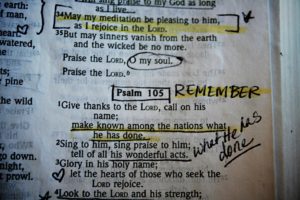 I know exactly when my daughter needs a nap. She[...] 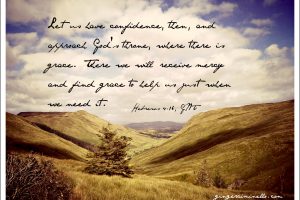