Dear Ginger: My BF or My BFF?

Dear Ginger,
Long story short: I asked a guy to a dance and didn’t know my best friend liked him. She was going to ask him! But I only learned that AFTER the guy and I  had a great time at the dance and decided to start dating. He is so sweet and is a great boyfriend.  My girl best friend thinks he has to make a choice between us now because she believes he could have had feelings for her if she asked him instead of me. She thinks maybe we should both be just friends with him, but if I break up with him now because of her I know it will hurt him. But if I don’t, I think she might get hurt. I’m so lost and confused… I don’t know what I should do. I’ve been praying so much about it, but every time I hang out with him I feel guilty now. I feel like there’s no right answer. Please help if you can!
-M

First of all – I REALLY feel for you. I hate that feeling of being in the middle of something, especially any relationship drama. Obviously both of these relationships are very important to you, as they should be. So again, I’m so sorry for the pain and confusion.

I have a group of high school girls who come to my house on Mondays for small group. I told them about your situation and they all agreed that this is a tough spot. I wanted to get their thoughts about the advice they might give a friend in the same situation. In the end we decided that the #1 first course of action is COMMUNICATION. This translates into some potential discomfort for a bit, but if you want to find yourself with both relationships, it’s the best thing. I think you have a few conversations in your immediate future.

1.) Pray for wisdom about which conversation to have first, that God would give you gentle words and a loving heart even if your girl BFF blames you for things. Sometimes we have to just listen and not try to defend ourselves- and that takes a ton of self-control. When someone accuses me of something that I don’t necessarily agree with, I want to lash back with excuses, reasons and a litany of defenses. The Gospel (the Good News that Jesus took my sin and punishment upon himself) reminds me that at the end of the day I’m a sinner and I mess up…  even when I don’t mean to. But it also means that I don’t have to defend my cause. I can choose humility and to lay down my wants and needs for someone else. Grrr – that can be really hard!

2.) Have a convo with you and your girl BFF. Start by praying WITH her. Then talk through the whole situation, tell her you want to hear everything from her perspective. Let her speak first. Once she’s had the chance to share everything, ask if you can tell things as you perceived them from your side of the story: “I wouldn’t have asked him if I knew you were going to, but I also can’t change the past. I can only move forward with the situation we have now. I value you and our friendship so much and want to do whatever I can to preserve it.” Also, ask your friend for permission to tell your BF what’s going on- if he’s in the middle of this situation, he deserves to know about it so he can respond however HE wants to. You two gals shouldn’t make all the decisions for him.

3.) If that feels intimidating, have the convo with a neutral 3rd party. I wouldn’t suggest someone your age. Instead consider asking an upperclassman you respect, a teacher, youth leader, even someone else’s mom. It’s important to have someone hear you and make sure you both are listening to each other.

4.) Keep your boyfriend in the loop. He should know what’s up! If he doesn’t know about your friend and her feelings for him, he can’t react/not react in a certain way. She will continue to perceive his behavior as flirting if he keeps acting the same way. This convo might need to happen with all three of you. YIKES. I know. But in order for your boyfriend to say how he feels and have your friend believe it, she might need to hear it in person. If this sounds crazy, consider bringing in the trusted person from step #3. Everyone needs to get everything out on the table.

None of this is easy, but it’s so vital for the health of your relationships. Drama happens when people ASSUME they know how someone else is feeling. Talk it out. Pray a bunch. Ask for wisdom. Hang in there.

“If any of you lacks wisdom, you should ask God, who gives generously to all without finding fault, and it will be given to you.” (James 1:5, NIV)

P.S. Here are some other blog posts for you to consider in this situation!

Dear M, Thank you again for your willingness to write[...]

Yesterday I jumped into the discussion that’s been all over[...] 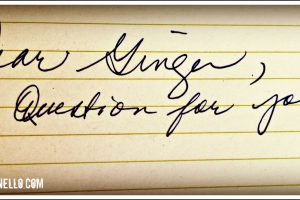