That’s the verse I’m memorizing this week. Psalm 57:8. The reason I am claiming this verse today isn’t because I pulled out my harp when I got out of bed. I identify with this verse because I don’t always awake full of the courage or desire to live out the joy of the Cross. Heck, I very rarely wake up with desire to do much of anything except plot when I can next take a nap or go to sleep.

If you open your Bible and turn to Psalm 57 you will see  inscription that preceeds the song. My Bible says: “Of David.  A miktam. When he had fled from Saul into the cave.”

A miktam was most likely a musical notation or title for psalms of penance for sin. (Jennifer Rothschild – Me, Myself & Lies) David was running for his life when this Psalm was written. He had likely been on the run for years. He spends the first portion of the passage asking for mercy and crying out to God. I picture him poring out these words on the verge of tears:

The passage continues as David anguishes over His situation. He lists his worries to the Lord. And then, starting in verse 7, the tone of the passage begins to make a shift.

“My heart is steadfast, O God, my heart is steadfast; I will sing and make music. Awake, my soul! Awake, harp and lyre!  I will awaken the dawn. I will praise you, O Lord, among the nations; I will sing of you among the peoples. For great is your love, reaching to the heavens; your faithfulness reaches to the skies. Be exalted, O God, above the heavens; let your glory be over all the earth.” (Psalm 57:7-11)

David is in real danger. He probably hasn’t slept, bathed, or had a regular meal in days. He is lonely and probably feeling anything but courageous.

I know that when I become overwhelmed I want to crawl up into a ball and have a good long cry until everything has blown over. I want God to swoop in and just fix it.

David demonstrates reliance upon God, but he also makes a choice when it comes to his emotions. David chooses to praise God in the midst of terror. He commands himself, “Don’t sleep through this!Don’t trust your heart, trust God!  Get up and get moving!”  David’s heart might have been telling him to hide, to distrust God (after all, wasn’t David SUPPOSED to be the King?), and to even check out for a while. Instead, David knew how important it was to be awake and alert.

The Hebrew word translated awake means “wake, life up (self), stir up (self).” (Rotschild)

Living wide awake is a choice.

I have a vivid memory from my childhood, one that[...] 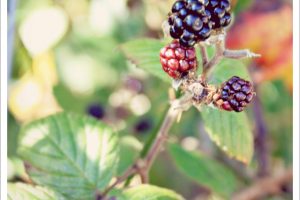 This fall I traveled with my family to Ireland. One[...]

I’ve been cleaning up  the files on my computer and[...]