There are many characters in the Bible with whom I can identify.

Moses doubted his call.
Jonah did not think life was fair.
Sarah tried to fix things on her own.
Abraham lied.
Gideon hid.

… we could do this all day.

I have a soft place in my heart for a woman in the book of Genesis who isn’t exactly heroine material. Hagar, the Egyptian handmaiden to Sarah. She’s a blip on the screen of the pages of time, and yet… in Hagar’s story we find a God who draws near to each of His children.

In Genesis 12 God promises Abraham that He will make him a great nation. One minor problem. Abraham (Abram) and his wife Sarah (Sarai) are well into their retirement and without a single child to call their own. But God not only makes a promise with Abraham, he makes a covenant. Time passes and Abraham and Sarah begin to wonder if maybe God needs a little bit of help. Read what happens:

She had an Egyptian maid named Hagar. Sarai said to Abram, “God has not seen fit to let me have a child. Sleep with my maid. Maybe I can get a family from her.” Abram agreed to do what Sarai said.

So Sarai, Abram’s wife, took her Egyptian maid Hagar and gave her to her husband Abram as a wife. Abram had been living ten years in Canaan when this took place. He slept with Hagar and she got pregnant. When Hagar learned she was pregnant, she looked down on her mistress.

Sarai told Abram, “It’s all your fault that I’m suffering this abuse. I put my maid in bed with you and the minute she knows she’s pregnant, she treats me like I’m nothing. May God decide which of us is right.”

“You decide,” said Abram. “Your maid is your business.”

There are so many issues in those first six verses. Rather than trusting God in His timing, A & S move forward and make their own way. Hagar becomes pregnant, which is exactly what Sarah had wanted. So WHY is Sarah being abusive to Hagar? Perhaps jealousy, perhaps shame. I don’t know, but I do know what it feels like to be wrongly accused. Hagar was OBEYING her masters, and yet she is punished for that very obedience. Can you imagine how alone she must have felt? She was living in tents, caravanning with a family, so very far from her own people. I would have been devastated. Out of hurt Hagar fled to the desert. But notice that she did not journey alone.

An angel of God found her beside a spring in the desert; it was the spring on the road to Shur. He said, “Hagar, maid of Sarai, what are you doing here?”

She said, “I’m running away from Sarai my mistress.”

The angel of God said, “Go back to your mistress. Put up with her abuse.” He continued, “I’m going to give you a big family, children past counting.

From this pregnancy, you’ll get a son: Name him Ishmael;
for God heard you, God answered you.
He’ll be a bucking bronco of a man,
a real fighter, fighting and being fought,
Always stirring up trouble,
always at odds with his family.”

That’s how that desert spring got named “God-Alive-Sees-Me Spring.” That spring is still there, between Kadesh and Bered. The details of this story don’t indicate that Hagar lived a life where all of her dreams came true. In fact, after Sarah and Abraham finally had a son, Hagar was forced to flee to the desert. And once again, she doesn’t go alone.

One day Sarah saw the son that Hagar the Egyptian had borne to Abraham, poking fun at her son Isaac. She told Abraham, “Get rid of this slave woman and her son. No child of this slave is going to share inheritance with my son Isaac!”

The matter gave great pain to Abraham—after all, Ishmael was his son. But God spoke to Abraham, “Don’t feel badly about the boy and your maid. Do whatever Sarah tells you. Your descendants will come through Isaac. Regarding your maid’s son, be assured that I’ll also develop a great nation from him—he’s your son, too.”

Abraham got up early the next morning, got some food together and a canteen of water for Hagar, put them on her back and sent her away with the child. She wandered off into the desert of Beersheba. When the water was gone, she left the child under a shrub and went off, fifty yards or so. She said, “I can’t watch my son die.” As she sat, she broke into sobs.

Meanwhile, God heard the boy crying. The angel of God called from Heaven to Hagar, “What’s wrong, Hagar? Don’t be afraid. God has heard the boy and knows the fix he’s in. Up now; go get the boy. Hold him tight. I’m going to make of him a great nation.”

Just then God opened her eyes. She looked. She saw a well of water. She went to it and filled her canteen and gave the boy a long, cool drink.

God was on the boy’s side as he grew up. He lived out in the desert and became a skilled archer. He lived in the Paran wilderness. And his mother got him a wife from Egypt. (Genesis 21:9-21)

The Lord looks down from heaven
and sees the whole human race.
From his throne he observes
all who live on the earth.
He made their hearts,
so he understands everything they do. (Psalm 33:13-15, MSG)

Question: How often do I live/fear/pray as though God doesn’t see or hear me?

Passion (not the fruit)

I spent ALL of last week on my adventure tangent.[...] 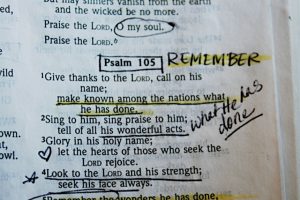 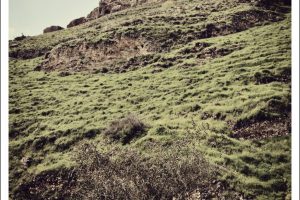